PRI, BRI, Megalink, Microlink, 1FL, DSL, Analog Trunk:  These are a collection of circuits that typically carry voice and video from the PSTN (public switched telephone network) into an organization or residence. They vary depending on the service type, scale of operation and the terminating equipment.

PRI: A Primary Rate Interface circuit (known as a Megalink) is the ISDN (integrated service digital network) that carries multiple channelized voice signals from the central office (CO) to your telephone system. That means multiple concurrent conversations or data streams are carried across a single wire known as a T1 (a data circuit that runs at the original 1.544 Mbps line rate).  Think of it as a pipe that can be sliced 24 (64 kb each) ways to support 24 concurrent conversations.

BRI: A Basic Rate Interface (known as a Microlink) carries digitized voice, data, or video streams to the PSTN and is typically used for Video Conferencing. IP (Internet Protocol) is quickly replacing BRI for video transmission.

1FL: Translates as 1 “flat” line.  The flat means “not measured” – unlimited local calling.  The industry refers to this as a common business line that carries a single voice service from the CO to your premises.  This is typically used for a single fax or phone service.

DSL: Digital subscriber line is for transmitting digital data over a phone line.  This is widely used to provide fast internet access over a conditioned phone line.

Analog trunk: This service usually comes in multiples and carries voice to and from the central office terminating on your premise equipment.  The multi-trunk configuration is accessed through a single phone number and rolls over the next available circuit until all are actively carrying a conversation or data stream. At this point the caller would get a busy signal. 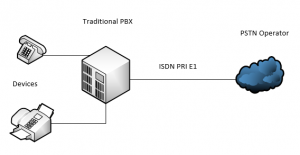 The original PBX (Private Branch eXchange) phone system technology is landline-based and relies on a physical PBX hardware box. Traditional analog landline phone lines or POTS (Plain Old Telephone Service) which are connected to the external PSTN enter your office and then connect to a PBX box. Then the phone lines are distributed to each desk in your office.

Compared to newer systems, traditional PBXs can be very expensive to set up. In addition to the cost of the PBX hardware you will also have to install traditional analog phone lines within and outside of your office if you don’t already have them. 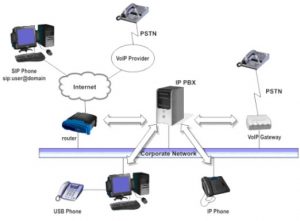 An IP or VoIP PBX is very similar to a traditional PBX phone system. The only difference is that it uses digital phone signals internally, rather than analog-based landlines.

Broadly speaking, internal calls are directly routed to the SIP address of the destination party. There is no need for the call to pass through the IP PBX server once the initial connection has been established. This means all voice traffic travels directly between the two endpoints, ensuring that the server will not become overloaded as the number of concurrent calls increases.

External calls are redirected to the VoIP gateway which connects the IP based system to the external PSTN (Public Switched Telephone Network). These gateways may be incorporated into the PBX and maintained by the organization or they may use one that is provided by an external vendor. The VoIP gateway itself can take many forms – it may be a standalone piece of hardware or an extension card that can simply be plugged into the server.

In fact, the IP PBX itself need not even be a separate physical device. Many organizations use IP PBX software to create a virtual server on an existing computer. There are quite a few proprietary solutions and open source applications that allow enterprises to take advantage of VoIP calling without requiring much in the way of equipment. This makes it very easy to test VoIP calls. Over the long-term, businesses can then upgrade their systems slowly for better reliability and integrity.

An IP PBX may still rely on an analog phone signal once the call leaves your office, but it uses VoIP technology within it. The main advantage is an easier set up: you can use Ethernet cables to connect your phones instead of traditional phone ones. That way, if you rearrange your office, you don’t have to do any rewiring.

It can also accommodate businesses with multiple locations and/or remote workers. Because call routing and transfers are being handled via the internet, you can transfer to somebody in another office (assuming that they’re connected to the same network). An employee who works from home can even plug in an IP-phone (or SIP-phone) and receive calls the same way they would in the office.

The initial upfront cost of the PBX hardware and installation may be a challenge for some; however, it can be a good option for larger businesses, since you generally don’t have to pay as much in monthly service fees compared to a hosted PBX, which we’ll describe next.

A hosted PBX is a newer PBX phone system technology. It also uses digital VoIP phone signals; however, unlike an IP PBX, it’s a cloud-based system that does not require you to purchase or install a physical PBX hardware box. Instead, you can manage PBX features like call routing, transfers, auto attendant, and voicemail from your internet browser or smartphone.

A hosted PBX offers the same portability as an IP PBX. Remote workers can connect a phone as if they were in the office. And when you’re on the go, you can even make calls from your cell phone using your business number.

The primary advantage to a hosted PBX is that there’s no hardware to purchase or install, so the initial costs are much lower. Instead, users pay a monthly subscription fee per extension. This makes a hosted PBX the most economical option for small businesses. Setup is also very easy because you just connect your phones with an Ethernet cable and manage your call routing settings online. 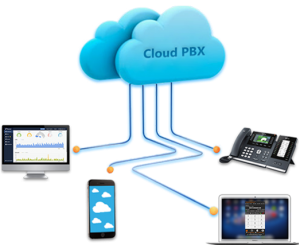 A virtual PBX is a “light” version of a hosted PBX. It works the same way as a hosted PBX, but generally offers fewer features.

The virtual PBX system can receive calls and route them to different employees based on predefined rules. What they can’t do, however, is actually give you phone service. It can only forward calls to an existing mobile, landline, or VoIP phone number.

A virtual PBX can be a good option if you need a professional-sounding phone system quickly and affordably. Setup time is virtually immediate. The downside is that a virtual PBX can be more expensive in the long-run, since you’ll need to continue paying your cell phone/landline bills on top of your virtual PBX subscription. 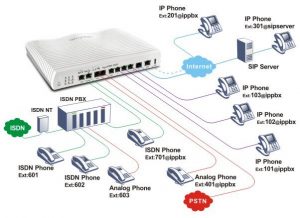 A hybrid PBX combines existing legacy (ISDN) PBX equipment with VoIP. A PBX connects internal users to the outside world with a PRI or BRI, which has 24 channels. There are often many PRIs to connect hundreds of phones. In a hybrid PBX, these PRIs connect to a device—this is the Hybrid PBX itself—and the two devices connect to the outside world via both PSTN trunks (ISDN) and SIP credentials. The hybrid PBX also has many IP extensions to connect directly to IP phones in the office. On one side of the device, there are number of Ethernet and telephone jacks; on the other, there is usually a WAN (to the internet), a LAN (to the internal network), a console port, and LED lights to indicate which lines are active.

A hybrid PBX has many of the same great features you can expect from VoIP services, including call rules, auto-attendant, and hold queues. The hybrid PBX also has the capacity for virtual conference rooms, fax over IP, and videoconferences. The hybrid PBX also can do SIP trunking. The most important feature of the hybrid PBX is that if either the legacy PBX or the VoIP server isn’t working, it automatically switches over to the other network.

One of the biggest benefits to having a hybrid PBX is for remote offices and secondary locations. Calls from one office to the other go through the hybrid PBX, so there are no long-distance charges. If a location is temporary, such as an amusement park or construction site, you can use cordless phones to connect directly to the hybrid PBX instead of going through the building’s telephone lines.

One of the biggest benefits to having a hybrid PBX can also be its biggest drawback: cost. You have to buy and maintain an on-premise device. The largest hybrid PBXs are well over a thousand dollars. But, you can end up saving money in the long term by owning your own equipment, rather than having a third party host your PBX.

How Many Phone Lines Can My Internet Connection (Mbps) Support?

Bandwidth is maximum rate at which your network can transfer data. And because VoIP technology transmits your voice as data, it’s one of the key factors in determining how many concurrent phone calls your internet connection can handle.

Bandwidth is measured by your download/upload speeds. Whichever of the two numbers is lower is your bandwidth.

Because most users download much more than they upload, most internet service providers (ISPs) design their networks to allow for faster downloads than uploads. This is why your upload speed is most likely lower than your download speed.

Each VoIP phone call typically requires 100 Kbps up and down – or 1/10th a Mbps. So if your upload speed is 10 Mbps, then your network can theoretically manage up to 100 VoIP phone calls at once. The actual number, however, is closer to 10 or 20 calls because of other bandwidth usage.

There are two main reasons why you need to give some leeway when measuring bandwidth:

Internet speeds fluctuate throughout the day. When there are more users in your local area using the internet, speeds can vary up to 21 percent, according to a study of broadband internet connections.

Another factor is web browsing. If you’re using the same internet connection to check email, stream videos, or run web applications, then your VoIP lines will have to compete for bandwidth. Heavy internet activity (such as the concurrent use of email, YouTube, and Spotify) takes about 1 Mbps download per user. Fortunately, they don’t require nearly as much upload bandwidth, which is typically the more important factor for VoIP phone calls. The exception, of course, is if you do a lot of upload-intensive work such as sharing videos/graphics or collaborating on files. If so, then this number could be a lot higher for you.